Welcome to SafariNow. Get off your accommodation booking by paying with the voucher code before .
South Africa/Free State Accommodation 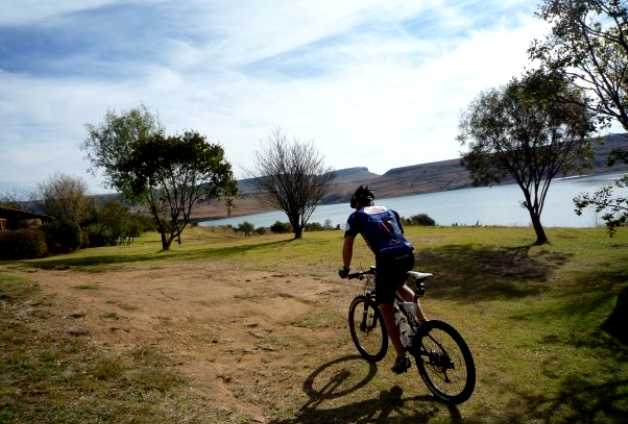 'The Free State landscape gladdens my heart, no matter what my mood. When I am here I feel that nothing can shut me in, that my thoughts can roam as far as the horizons.'  Nelson Mandela

The Free State is South Africa's Cinderella province. Every country has one - the place you make jokes about. You know what they're like ... 'first prize is a week's holiday in the Free State. Second prize is two weeks...' Well, as in most parts of the world, it's a bit mean and it's pretty uncalled for. OK - the Free State is landlocked so it doesn't have Cape Town's beaches, and its economy is based on large scale maize agriculture and mining, neither of which are particular decorative. However - it is seriously underrated.

The N1, which runs from Cape Town to Johannesburg and beyond runs right through the middle of the Free State and many people who've travelled along it at 120km/h, looking neither left nor right, can state with blissfully ignorant authority that 'there's nothing in the Free State'. Well, yeah - but head away from the N1 into the smaller towns and villages and you'll find lovely scenery and a host of cultural attractions, including some unusual museums, places of pilgrimage, and township tours. Even the rather dry industrial mining towns of the western part of the province have their attractions. As well as visiting a handful of museums and small nature reserves, you could do an underground mine tour and watch gold pouring.

There are lovely mountainous areas in the east, where the dramatic, concave sandstone cliffs and bright green rolling grasslands form the foothills of the Maluti Mountains and the Drakensberg. The main farming activity here is the growing of cherries, which tends to be a much prettier crop than maize. There is great hiking and mountain biking in the hills, and the scenery is awesome. The Golden Gate Highlands National Park, with its many day walks and hiking trails, pony trails, lovely rock art and small game, gets its name from the magnificent golden-hued sandstone cliffs. Adjacent to the park is the Basotho Cultural Village, which showcases both historical and contemporary aspects of the Sotho culture, which straddles both the Free State and the adjacent kingdom of Lesotho. Small towns, such as Clarens, are idyllic little hideaways with a significant population of artists, crafters and other rat-race refugees, and many lovely old houses are built from the glowing golden sandstone.

The Ash River, which tumbles into the eastern Free State from the mountains of Lesotho, has some of the most dependable white water rafting in South Africa. There is excellent fly fishing in the Eastern Highlands - both for trout and the far more interesting indigenous yellow fish, which is found in abundance in the huge Sterkfontein Dam. The small farming town of Marquard is the centre of the cherry growing area, and is a mountain biking destination of note. Every November in Ficksburg - another small farming town with pretensions to becoming a hip spot - throws a cherry festival. It's an excuse for the local people to see a few outsiders as the huge band of gypsy traders that travel from festival to festival turn up in force. You may - if you're lucky - even find a few cherries.

The northern boundary of the province is the Vaal River, which supports some fun rafting trips, particularly near the town of Parys. Parys, which is the Afrikaans version of Paris, is a great little town, with excellent coffee shops, loads of arty crafty outlets and - it must have something to do with the name - a good number of fashion designers. Close to Parys is the Vredefort Dome, which is South Africa's newest World Heritage Site. It's the site of an ancient meteorite impact, the scars of which are still discernable. As well as the spectacular, rather rugged terrain, which is as a result of the impact, attractions here include some small game farms, hiking trails and some pretty mean mountain biking trails.

Bloemfontein, the capital of the Free State, is a pleasant small city with lots of open space and some interesting museums. So there is loads to do in the Free State, but bear in mind that it's all pretty low key and laid back. This is still the agricultural heartland of South Africa - a place where things should not be rushed.