Welcome to SafariNow. Get off your accommodation booking by paying with the voucher code before .
South Africa/Gauteng/Pretoria (Tshwane)/Sunnyside/Loftus Versfeld Stadium 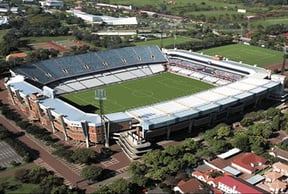 One of South Africa’s top stadiums with a seating capacity for 50 000 people, Loftus Versfeld Stadium is situated in South Africa’s capital Pretoria (Tshwane). It was one of the 2010 FIFA World Cup venues, hosting five first-round matches and one second-round match.

Home turf of the Premier Soccer League dynamos Mamelodi Sundowns, the Blue Bulls Currie Cup rugby team and the Bulls Super 12 rugby squad, it was also one of the primary venues for the 1995 Rugby World Cup. In addition to being one of South Africa’s premier sporting venues, Loftus Versfeld is also a thriving venue for big concerts.

Tshwane, Pretoria, "Jacaranda City," ePitoli - this graceful city has enormous appeal, a fascinating history and is now a symbol of South Africa's true unity. It's an elegant, quiet city in complete contrast to its bustling neighbour, Johannesburg, which is just 50 kilomtres apart and less than an hour's drive away.

Sleeps 12 in 6 rooms
Sunnyside Guest House
Pro-Active Guest House offers a sound, unique and yet affordable accommodation for all travellers, be it business or holiday getaways. Our...
View Deal

Sleeps 12 in 6 rooms
Sunnyside Guest House
Li'TheCa Guesthouse and Function Venue is located in the heart of Pretoria, Sunnyside. The name...
R1000
Avg per night for 2 guests
View Deal

Click to display the map
Loftus Versfeld Stadium is 1.6km from the centre of Sunnyside , the nearest airport 7.7km (Waterkloof AFB Airport).
*Distances are shown as the crow flies and not necessarily the actual travelling

Other things to do near Sunnyside

4 x 4 Trails in Hartbeespoort Dam
De Wildt 4x4 is the perfect terrain for 4x4 enthusiasts. It is situated between Pretoria North,...
See all things to do near Sunnyside
WEB5