Welcome to SafariNow. Get off your accommodation booking by paying with the voucher code before .
South Africa/Limpopo Province/Polokwane (Pietersburg)/Polokwane Museum 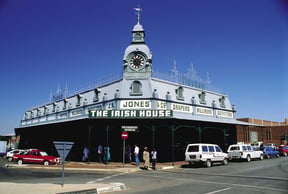 Conveniently situated across the road from the Hugh Exton Photographic Museum and Civic Centre, Polokwane Museum is an excellent spot to while away a few hours.

Occupying a lovely late Victorian shop built in 1906; the building was beautifully restored in 1986 and is now a National Monument.

Here you can discover the secrets of this city and surrounding region as well as Stone Age and Iron Age artefacts. A highlight of the museum is a display depicting the colourful traditional cultures of Limpopo people.

Complete your trip back in time and stroll across the street to the Hugh Exton Photographic Museum for an insight into the gold rush days of Polokwane's beginnings.

★★★★★ 3 Reviews
Sleeps 50 in 25 rooms
Polokwane (Pietersburg) Guest House
10% OFF   Cycad Guest House proudly offers luxury accommodation in Polokwane, Limpopo. The comfort and quality of service, as well as the beauty and...
$110 R1950
Avg per night for 2 guests
View Deal

★★★★★ 24 Reviews
Sleeps 9 in 4 rooms
Capricorn(suburb) Bed and Breakfast
Danlee Overnight Accommodation is conveniently situated 2.5 km from the Polokwane CBD and 2 km from...
R940
Avg per night for 2 guests
View Deal

Click to display the map
Polokwane Museum is 1.3km from the centre of Polokwane (Pietersburg) , the nearest airport 7.1km (Polokwane Airport).
*Distances are shown as the crow flies and not necessarily the actual travelling

Other things to do near Polokwane (Pietersburg)

★★★★★ 1 Review
Popular Attraction in Haenertsburg
Get airborne on an adrenalin pumping trip above three waterfalls and the Great Letaba River Gorge!...

★★★★★ 2 Reviews
Popular Attraction in Haenertsburg
Grab the whole family and soak up the countrified charms of this quaint little dairy farm. Winners...

Popular Attraction in Mokopane (Potgietersrus)
Rich in biodiversity, the scenically stunning Makapansgat Valley and Caves play a significant role...
See all things to do near Polokwane (Pietersburg)
WEB2