Welcome to SafariNow. Get off your accommodation booking by paying with the voucher code before .
Kenya/Nairobi County/Nairobi/Langata/Karen Blixen Museum 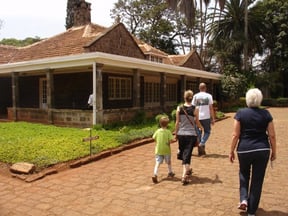 Karen Blixen Museum is the original Kenyan home of Danish author Karen Blixen; author of the book 'Out of Africa', which was made into a Academy-nominated film in 1985 of the same name.

Following Karen Blixen's departure from Kenya in 1931, the estate has changed ownership several times, until it was purchased by the Danish government in 1964 and given to the Kenyan government as an independence gift. The estate was initially used as the principal's residence for the College of Nutrition, but following the autobiographic movie 'Out of Africa' in 1985, it was turned into a museum the following year.

The museum helps put Blixen's movie into context, and much of the movie scenes were filmed here on location. There are a few items that still feature inside the home from Blixen's period in Africa, with some rooms restored to their former state.

Sleeps 8 in 4 rooms
Langata Hotel
Located in Karen, a serene and upmarket suburb of Nairobi, our guest house offers quality budget accommodation in Kenya as well as safaris...
R1118
Avg per night for 2 guests
View Deal

Sleeps 46 in 23 rooms
Langata Hotel
Hotel Troy offers a peaceful atmosphere where guests can wake up to singing birds. Bird watchers will enjoy the many species of African...
R1852
Avg per night for 2 guests
View Deal

Sleeps 53 in 53 rooms
Langata Backpacker
This is a friendly and affordable hostel situated in a quiet neighbourhood of Nairobi. It is within easy walking distance to major tourist...
R271
Avg per night
View Deal

Sleeps 10 in 5 rooms
Langata Guest House
Rudy's Restaurant and Guesthouse is a private villa located in the serene suburb of Karen, Kenya....
R6770
Avg per night for 2 guests
View Deal

Sleeps 20 in 0 rooms
Langata
Kolping Langata is located off Magadi Road, Langata. The hotel which is surrounded by lush garden and greenery is an ideal place for...
View Deal

Sleeps 12 in 6 rooms
Langata Guest House
Hogmead is one of Nairobi’s latest luxury residences, offering the finest gateway to East Africa’s great outdoors. Nestled in an exclusive...
R9580
Avg per night for 2 guests
View Deal
See all accommodation near Langata

Click to display the map
Karen Blixen Museum is 2.4km from the centre of Langata , the nearest airport 11.8km (Wilson Airport).
*Distances are shown as the crow flies and not necessarily the actual travelling
WEB5