Welcome to SafariNow. Get off your accommodation booking by paying with the voucher code before .
South Africa/Western Cape/Agulhas/Cape Agulhas 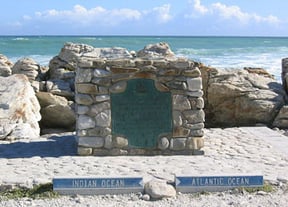 Yes, it’s official, this is the spot to get your photo taken at the southernmost tip of Africa.

Ocean currents between Cape Agulhas and Cape Point may be constantly moving and mingling, however, the official meeting place of the Indian and Atlantic Oceans, according to the International Hydrographical Organisation, is Cape Agulhas. This demarcation is cast in stone!

This wild and treacherous coastline known as the Graveyard of Ships only adds to the dramatic and remote beauty of the area. Pearl-like winter days, between the wild storms that lash this Cape, are gentle, peaceful, and windless.

A fascinating historic and cultural legacy has been left here by the Khoikhoi beach nomads, who lived along the Cape Agulhas coastline for many centuries. The well preserved shell middens and fish-traps are of interest to many a historian and archaeologist.

Reviews:
2 Reviews
Things to do in Agulhas

★★★★★ 12 Reviews
Sleeps 2 in 1 room
LAgulhas Self-catering
The Gift is a charming, private and comfortable self-catering flatlet set in the garden of a main dwelling in LAgulhas. The flatlet is...
R550
Avg per night
View Deal

Sleeps 4 in 2 rooms
Agulhas Self-catering
The Perfect spot. Cozy two-bedroom flat with one bathroom in the Stormsee block of flats. You even have a garage that you can use. ...
R1450
Avg per night
View Deal

★★★★★ 4 Reviews
Sleeps 10 in 5 rooms
Agulhas Self-catering
Cooper Straat 14 is a charming double-storey house situated in Agulhas, a rocky headland in the Western Cape. The house can accommodate up...
R700
Avg per night for 2 guests
View Deal

Sleeps 4 in 2 rooms
Agulhas Self-catering
T-Nie-C is a log cabin in L'Agulhas opposite the tidal pool. Guests can enjoy an uninterrupted sea view from home.The house can accommodate...
R1600
Avg per night
View Deal
See all accommodation near Agulhas

Click to display the map
Cape Agulhas is 1.3km from the centre of Agulhas , the nearest airport 184.1km (Cape Town International Airport).
*Distances are shown as the crow flies and not necessarily the actual travelling
WEB3