The Saracens Head Inn
Welcome to SafariNow. Get off your accommodation booking by paying with the voucher code before . 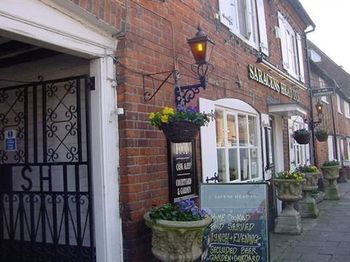 About The Saracens Head Inn

The Saracen’s Head Inn is a traditional English pub serving real ales, fine wines and home-cooked food every lunchtime and evening. The original stables surrounding the courtyard have been converted into stylish, comfortable en-suite accommodation available for Bed and Breakfast. During the conversion, we discovered an underground bear pit near the cellar. This was used for bear 'baiting' (fighting) over 300years ago, thankfully a tradition no longer kept! We are situated a stone’s throw away from the fashionable shops and boutiques in the High Street of Amersham Old Town. Trains from Amersham Station go directly into London in less than 30mins. It is also extremely popular with walkers who wish to explore the countryside surrounding us. Amersham - probably more than any other similar small town in England - preserves in the streets of the Old Town the same general appearance that it displayed during the 17th and 18th centuries. There is evidence that a Roman Villa existed in the area (any remains now believed buried under Shardeloes Lane). However, the origins of the town go back to pre Saxon times. Amersham was then called Agmodesham. The Doomsday Book listed Amersham as Elmodesham, with 6 manors, one belonging to the wife of Edward the Confessor. In 1200, King John granted the town a market and fair, the fair is still held every year on the 19th and 20th of September, the market every Tuesday, but it has moved to Amersham on the Hill. The Reformation had some roots in the town as several Lollards were condemned to death and burnt at the stake, a memorial on the hill above the town commemorates this event and in 2001 the people of Amersham performed a community play re creating the events of the time.

Click to display the map
The Saracens Head Inn is 1.5km from the centre of Amersham , the nearest airport 28.2km (Heathrow).
*Distances are shown as the crow flies and not necessarily the actual travelling
×