Teremok Marine
Welcome to SafariNow. Get off your accommodation booking by paying with the voucher code before . 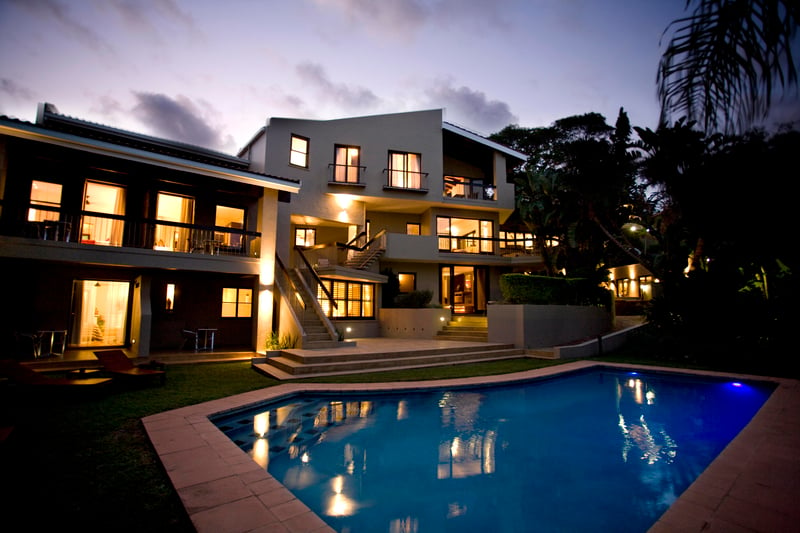 Along the tropical belt of KwaZulu-Natal, nestled amongst the palm and giant Milkwood trees, lies Teremok Marine a luxurious 5 Star boutique lodge whose name translates from the Russian word for little hideaway. Prestigiously positioned on Marine Drive, just 1 km from the ever-popular Umhlanga Rocks village, the uber deluxe Teremok Marine provides a serene, home-away-from-home experience for the most discerning of business executives, and leisure travellers alike.

The recipient of several illustrious accolades, Teremok Marine was the recipient of the Zulu Kingdom Service Excellence Award for four consecutive years, and was the winner of the inaugural Amarula Best Retreats in Africa Service Excellence Award in 2008. Teremok Marine was also a nominee in the South Africa’s Leading Boutique Hotel category of the 2010 World Travel Awards.

Teremok was residence to the Vladykin family for many years having initially been built by Constantine Vladykin in 1968 as a two-bedroom holiday home. Known fondly as ‘Kotchka’, Vladykin had escaped the Russian Revolution with the help of the Red Cross, and was educated at Cambourne School of Mines, where he qualified as a mining surveyor. This brought him to South Africa where he married the daughter of a Belgian diamond cutter, and in time joined the family business. In 1966 Kotchka decided to retire to the coast where he had purchased land on Marine Drive, and with the help of his good friend and architect, Steffan Ahrends, designer of ‘Milkwood’ the Oppenheimer family’s Umhlanga home, Teremok was created.

Kotchka could never have imagined that years later, his beloved 'little hideaway' would become one of KwaZulu-Natal’s finest boutique guest houses, but in 2002 the property finally came onto the market and was quickly snapped up by Debbie Davidson, owner of The Barnyard Theatre, Gateway, who officially opened Teremok Lodge in December 2003.

Due to Teremok’s truly colourful history, the new owners decided that the structure and feel should remain true to the essence of what was originally designed, built, and joyously lived in for so many years. Teremok was purchased as a three-bedroom house and, while little was done to the exterior, the inside was given a complete overhaul. Original doors, sash windows, and wooden flooring were left in place or reused elsewhere and the photos displayed around the house pay tribute to the Vladykin family.

Every inch of Teremok clearly illustrates the meticulous attention to detail that has gone into creating the ultimate in luxury accommodation. A feast for the senses, all of the eight suites are unique in design, layout, and feel with small subtleties such as individual scent, mood-music, and evening sweets all helping to create an enchanting atmosphere unlike any other.

Extras include home entertainment systems with LCD screens and DVD players, iPod docking stations, as well as complimentary ADSL Internet connection in every room. A library of DVDs and a selection of music CDs are available from reception at any time.

Teremok also offers its guests a wide range of services and facilities to help make their stay ultra comfortable. Keeping with the home-away-from-home feel, two well-positioned complimentary tea and coffee stations and an honesty bar help guests feel relaxed in the lodge. Daily weather and foreign exchange reports slipped under the doors of the suites help guests to prepare for the day ahead, whilst all necessary measures have also been taken for guests to feel safe during their stay at Teremok. There is secure off-road parking as well as security officers and an armed response unit in case of emergency.

For the health conscious, Teremok has an extensively equipped and well air-conditioned gym, whilst those wishing to enjoy the outdoors can make use of the pool which is located in the lush, landscaped gardens prolific with birdlife. The property also has a newly renovated spa facility, and with full-time therapists on hand, guests are encouraged to indulge in one of the superb treatments on offer.

Beach: Umhlanga is well known for its blue flag beach and the promenade that runs along the beach front. The promenade starts just 200 metres from Teremok

Golf: There are numerous golf courses situated in the Durban area as well as up the North Coast which offer courses of a high standard, many of which are scenic.

1 guest review Reviews of
★★★★★
5 out of 5 stars
5 star 1
4 star 0
3 star 0
2 star 0
1 star 0
Willie Scott, South Africa
★★★★★
05 November 2012
We have enjoyed a very special stay at Teremok and the service and accomodation was of 5 star quality. Small details and assisting us with special requests make this truly a wonderful establishment to visit! We will definitely visit again!

Click to display the map
Teremok Marine is 1.1km from the centre of Umhlanga , the nearest airport 14km (King Shaka International Airport).
*Distances are shown as the crow flies and not necessarily the actual travelling
×