Sosian
Welcome to SafariNow. Get off your accommodation booking by paying with the voucher code before . 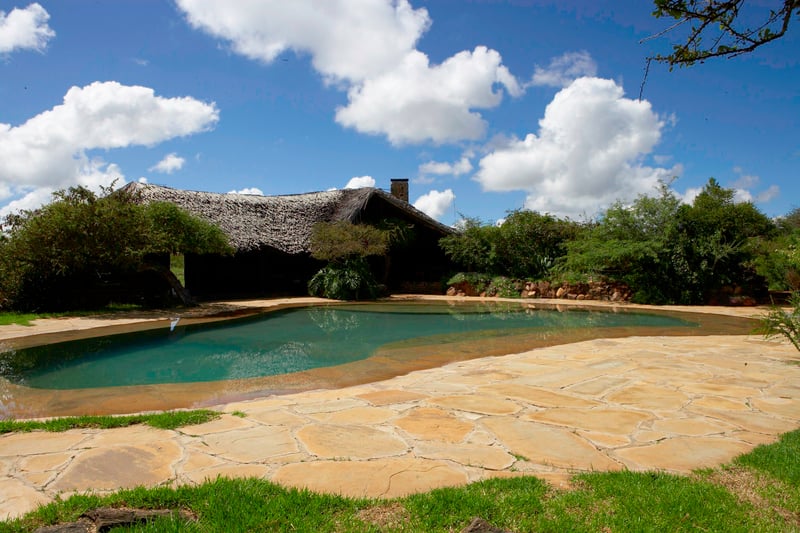 Sosian is a 24,000 acre private wildlife conservancy. We pride ourselves on managing a unique blend of tourism, conservation and traditional cattle ranching in Laikipia’s highlands. Sosian’s original ranch house was built in the 1940s by Italian artisans and beautifully restored in recent years to accommodate up to 14 people, while maintaining the welcoming atmosphere of a private home, known now as Sosian Lodge. The lodge features a beautiful rock swimming pool, set beside a soaring open sided thatched roof house spaced with hammocks and comfy day beds, a tennis court, riding manege, and organic vegetable garden. The ranch lies at high altitude, which makes for a perfect climate with no record of malaria.

Seven cottages are dotted throughout the garden, a wonderful haven dominated by verdant greenery and flowers all set against a back drop of Mount Kenya with views for miles over the Laikipia Plateau and true unspoilt Africa. Each cottage lies with its own private verandah and en-suite fully plumbed bathroom.

Sosian's speciality is in providing a totally private game-viewing experience, away from the restrictions of National Park rules. This sense of freedom and exploration means that we can offer action-packed adventures in the surrounding Laikipia wilderness. Trekking, bush walks, riding, camel safaris, game drives, and night-drives all offer a multitude of unique ways to seeing game. The guiding is of the highest standards and complement the huge range of activities available. Sosian also offers specialized walking safaris; exploring the bush and tracking animals during the day on foot and sleeping in a mobile tented camp each night which moves daily to a new location, often based on the course of a perennial or seasonal river.

As well as looking for wildlife, other activities include fishing, archery, tennis, rafting, tubing down the river, and swimming in the rivers after jumping off waterfalls. A visit to a nearby Samburu settlement should not be missed and provides a fascinating insight into traditional pastoral life which has not changed appreciably in hundreds of years. Sosian has an expanding herd of over 600 Boran cattle, including a pedigree breeding herd and small dairy. A tour of the ranching side of Sosian is another fascinating activity not to be missed. Guests can lend a hand with dipping, weighing and vaccinating, and learn about the trials of keeping unfenced cattle in this wild environment full of large predators.

Sosian is well-known for its delicious home cooking, using fresh ingredients from the garden, and its warm and friendly hospitality. There are a variety of wonderful places to eat, including picnics by the river, lunches by the swimming pool and bush dinners around an open fire followed by camping under the stars for the more adventurous.

As well as big herds of elephant, zebra, buffalo, numerous species of antelope, giraffe and hippo, lion, leopard, cheetah and spotted hyenas are also regularly spotted. Sosian is home to some rare and endangered mammal species such as Jackson’s hartebeest, Grevy’s zebra, reticulated giraffe, striped hyena and aardwolf. The birdlife is spectacular and large raptors such as Martial eagle, African hawk eagle, and bateleur are resident and often seen.

Safari: Sosian is home to some rare and endangered mammal species such as Jackson’s hartebeest, Grevy’s zebra, reticulated giraffe, striped hyena, and aardwolf.

Click to display the map
Sosian is 9.8km from the centre of Laikipia , the nearest airport 165.9km (Eldoret International Airport).
*Distances are shown as the crow flies and not necessarily the actual travelling
×