Okiep Country Hotel
Welcome to SafariNow. Get off your accommodation booking by paying with the voucher code before . 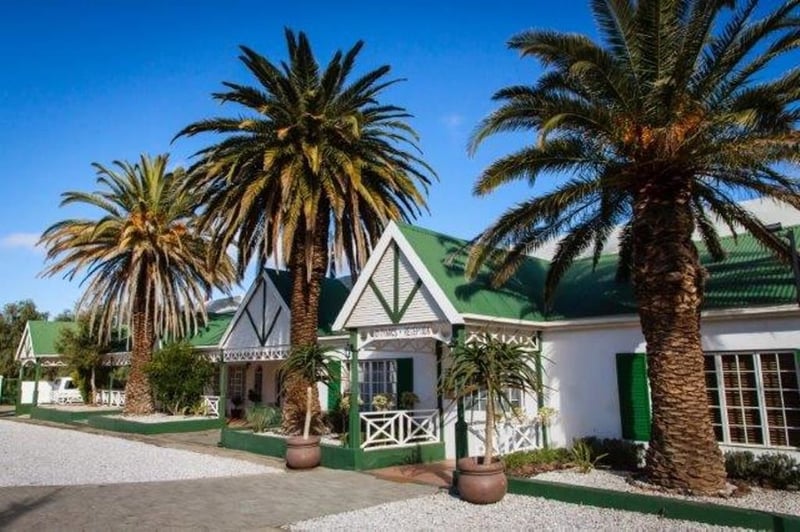 Okiep Country Hotel is a convenient stopover or holiday base for tourists, nature lovers, businessmen, and travellers. Located 100 km from the Namibian border on the N7 in the heart of Namaqualand, the hotel is the ideal stopover between Cape Town and Windhoek.

Malcolm and his friendly staff offer you traditional country hospitality in a modern and elegant setting in the historic town of Okiep, once the site of the richest copper mine in the world. Tours to the surrounding areas are also available on request. All rooms are en-suite, with air-conditioning and DStv.

Okiep is the oldest mining town in South Africa, where copper was first discovered and mined in 1855. A railway line from Okiep to Port Nolloth was built in 1866 for the shipping of copper, and because there was not enough water for the steam engines, the Namaqualand Mule Train was pulled by mules until 1890. In 1918 the Okiep copper mines ceased operating and the place almost became a ghost town. In springtime, Okiep is - like the whole of Namaqualand - very rich in blossoming wild flowers.

4 / 5
★★★★★
37 reviews
5 star
4 star
3 star
2 star
1 star
brad britz
December 2019
★★★★★ Best welcome received yet, beautiful person in and out, was even offered a welcome drink! Aircon was not working but was fixed in a jiffy. Personnel always willing and able to assist.
alta vorback
September 2019
★★★★★ The Staff, making us feel welcome, the accommodation .. everything was perfect and all we needed ! Thank you!
mark drysdale
August 2019
★★★★★ The noise of cars street racing up and down the road outside was hectic
fransette swanepoel
June 2019
★★★★★ We enjoyed our stay. Our children loved the pool table and old style arcade game. We enjoyed a lovely supper and a good breakfast on our stay. Relaxing atmosphere and friendly staff made the stay great.
amanda verwey
May 2019
★★★★★ From the moment you arrive the staff make you feel welcome and attend to your every need. I can recommend this Hotel to everyone.

Click to display the map
Okiep Country Hotel is 0.3km from the centre of Okiep , the nearest airport 340.8km (Keetmanshoop Airport).
*Distances are shown as the crow flies and not necessarily the actual travelling
From$54.51
Avg per night for 2 guests
per night