African Footprints Lodge
Welcome to SafariNow. Get off your accommodation booking by paying with the voucher code before . 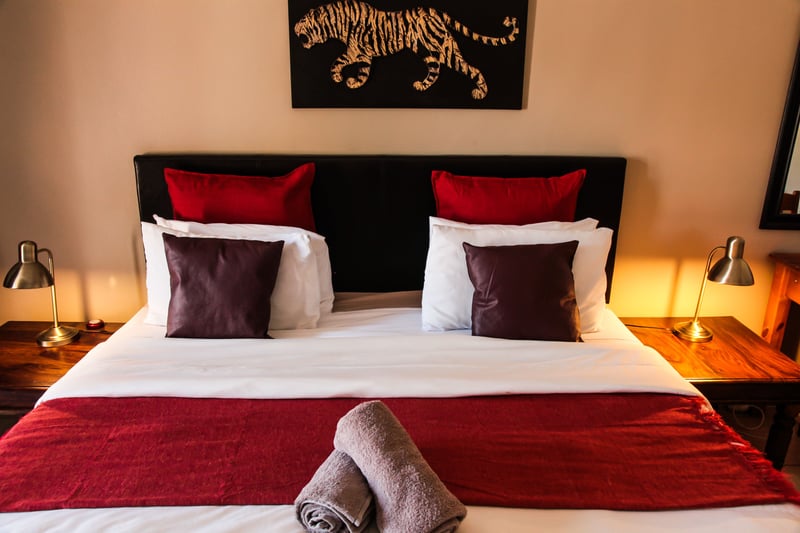 African Footprints Lodge offers comfortable and stylish accommodation situated in Bloemfontein. It is close to many shops, restaurants and entertainment facilities.There are 11 en-suite guest rooms available with a chic African theme, as well as a large dormitory room on request. All the rooms have private entrances, tea and coffee-making facilities, TVs with Dstv access and air-conditioning. Breakfast can be arranged on request, at extra cost. We also offer Bar services as liquor could be bought on premises.Conferencing facilities are provided for up to 124 delegates, it can also be transformed to suite any occasion. Facilities at the lodge include braai facilities, a swimming pool and secure on-site parking.We have a lot of recreation and activities nearby the establishment. These are a few of the historical buildings of Bloemfontein; The National Afrikaans Literature Museum, Old Presidency, Twin-spire Church, Anglican Cathedral, Maphikela House, Digareteneng Houses, Appeal Court, Supreme Court, Fourth Raadsaal, Lebohang Building,Provincial Government Building, Bram Fischer Building ,City Hall, Bloemfontein Public Library.The Museums are; Freshford House Museum,The National Museum, National Women’s Memorial & Anglo Boer War Museum, First Raadsaal Museum, Wagon Museum, Oliewenhuis Art Museum, Queen’s Fort Military Museum, Choet Visser Rugby Museum, Special Service Battalion Museum, SA Armour Museum, Free State Agricultural Museum.There are also Parks nearby, such as Naval Hill (Nelson Mandela statue) which is an extremely popular hill providing excellent view of the town and the Franklin Game Reserve forms part of the hill. Nelson Mandela Statue.State President Swart Park, the facilities at this park form the focal point for international and national sports activities. This includes a rugby stadium (where soccer matches are also played), as well as a cricket stadium, athletics stadium and tennis courts.King’s Park, Bloemfontein is fondly known as the “City of roses” and more than 4 000 rose trees have been planted in the rose garden at King’s Park, which was opened in 1925 by the Prince of Wales, Eduard VIII.Other attractions are Boyden Observatory, Bloemfontein Zoo, Modenso Park Model Steam Trains, Maselspoort Resort, Windmill Casino, Free State National Botanical Garden, Lock Logan Waterfront, King’s Park Arts and Craft Market, Boeremark (Farmers’ Market) as well as clubs, restaurants, pubs and cinemas and township tours. Last but not least, stadium and parks such as, Chevrolet Park which is home ground of the Chevrolet Knights and is situated in the heart of the Free State Chevrolet Park is situated at Kings Way, Bloemfontein, Free State, South Africa.Free State Stadium (Vodacom Park) has a seating capacity of 46 000 is a situated in Bloemfontein, used mainly for rugby, cricket and association football. Free State Stadium is situated at Kings Way, Bloemfontein, Free State, South Africa.

8 guest reviews Reviews of
★★★★★
4 out of 5 stars
5 star 3
4 star 3
3 star 2
2 star 0
1 star 0
Charmaine Axsel
★★★★★
12 December 2019
Service was fantastic and everything very clean
Pamela Mboweni
★★★★★
01 September 2019
We loved the warm reception we received and the flexibility of the host and willingness to assist. It was a great experience.
Frans Radebe
★★★★★
04 February 2019
the place was neat, modern and easy to locate with all the simple comfort it offers
Chrizelle Combrink
★★★★★
17 January 2018
Had great fun at the braai and swimming pool area walking distance from a spar. Aircons for the Free State heat.Friendly and welcoming staff.
Andrew Turner
★★★★★
19 December 2017
We arrived with a lady helping us that did not really know what was going on with the reservation. We asked about breakfast for the morning for which we were informed. We said we would take it but there was no sight or sound of anyone in the morning. A little more attention to detail !
Show More Reviews

Click to display the map
African Footprints Lodge is 1km from the centre of Universitas , the nearest airport 9,8km (New Tempe Airport).
*Distances are shown as the crow flies and not necessarily the actual travelling
×