Welcome to SafariNow. Get off your accommodation booking by paying with the voucher code before .
South Africa/Free State/Bloemfontein/Willows/Free State Stadium 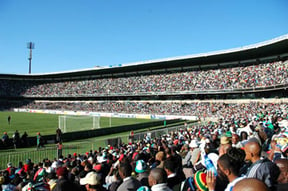 Bloemfontein certainly doesn’t lack when it comes to sports facilities and boasts a fine assortment. The 48 000-seater Free State Stadium is companion to an international standard athletics stadium, the Goodyear Park cricket grounds which is used for international matches, an artificial turf hockey stadium and great tennis facilities.

The 1995 Rugby World Cup brought about a significantly improved stadium with seating bordering the field. Bloemfontein's chief stadium has also hosted international football events – some of the 1996 African Cup of Nations matches were played here. Improvements to the Free State Stadium for the 2010 FIFA World Cup included enlarging the seating capacity and upgrades to all facilities.

Sleeps 14 in 6 rooms
Willows Hotel
Nobis House offers accommodation in Willows. There is an outdoor pool and guests can make use of free WiFi and free private parking. All...
R750
Avg per night
View Deal

Sleeps 188 in 0 rooms
Willows Hotel
Protea Hotel by Marriott Bloemfontein Willow Lake is ideally and uniquely set on the border of the...
R1803
Avg per night for 2 guests
View Deal
See all accommodation near Willows

Click to display the map
Free State Stadium is 0.8km from the centre of Willows , the nearest airport 10.9km (Bloemfontein Airport).
*Distances are shown as the crow flies and not necessarily the actual travelling

Other things to do near Willows

Shopping Mall in Brandwag
Mimosa Mall is one of the Free State’s most desirable and luxurious shopping centres. Fashionable...
See all things to do near Willows
WEB3