Welcome to SafariNow. Get off your accommodation booking by paying with the voucher code before .
South Africa/Limpopo Province/Soutpansberg/Mashovhela Pool

The second most sacred site for some Venda people 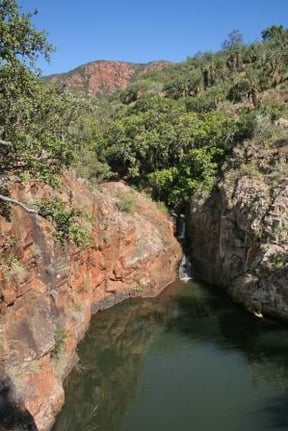 Mashovhela, also traditionally known as “the place where the drums can be heard”, is the second most sacred place in Venda folklore. This sacred site is still used occasionally by sangomas in rain-making ceremonies. A few years ago the sangomas beat their drums - shortly after which Venda had the heaviest rains and most devastating floods in living memory.!

According to Venda lore, the legendary and powerful King Thohoiyanda had a mystical drum, Ngoma Lungundo ('drum of the dead'). As his enemies approached this drum was beaten and his foes just dropped dead. One night, King Thohoiyanda and the sacred drum mysteriously disappeared from his royal kraal. Neither were ever seen again.

It is believed he disappeared into the Western Soutpansberg, where Mashovhela Lodge is situated. Tradition has it that it is this sacred drum that can sometimes be heard in the echoes from the rock cliffs of Mashovhela Pool. Come and listen for the drum beating at Mashovhela.

Things to do in Soutpansberg

The Goose and Labrador Bed an...

★★★★★ 3 Reviews
Sleeps 14 in 7 rooms
Makhado (Louis Trichardt) Self-catering, Bed and Breakfast
The Goose and Labrador Bed and Breakfast is located on a working avocado and macadamia nut farm...
R560
Avg per night for 2 guests
View Deal

Sleeps 36 in 17 rooms
Makhado (Louis Trichardt)
Located in the heart of Louis Trichardt, we have modern rooms and suites, all designed to guarantee maximum comfort and hospitality from...
R850
Avg per night
View Deal

Sleeps 12 in 5 rooms
Thohoyandou Lodge
Drift away in one of our private, and quintessentially decorated villas. Our villas offer maximum privacy with beautiful views of the...
R2800
Avg per night
View Deal

Click to display the map
Mashovhela Pool is 1539.3km from the centre of Soutpansberg , the nearest airport 109.9km (Polokwane Airport).
*Distances are shown as the crow flies and not necessarily the actual travelling

Other things to do near Soutpansberg

★★★★★ 1 Review
Popular Attraction in Clanwilliam
Do you want an unique Rooibos tea experience? Then you must visit the Rooibos Teahouse at NetMar in...

★★★★★ 1 Review
Shop in Vanrhynsdorp
Situated off the N7, north of Vanrhynsdorp, the Knersvlakte Spens Nursery and Farm shop extends a...

★★★★★ 1 Review
Hiking Trail in Cederberg Wilderness Area
From Dwarsrivier, take the road towards Ceres until you see a Nature Conservation sign indicating...
See all things to do near Soutpansberg
WEB4