Welcome to SafariNow. Get off your accommodation booking by paying with the voucher code before .
South Africa/KwaZulu-Natal/South Coast/Mtwalume Beach 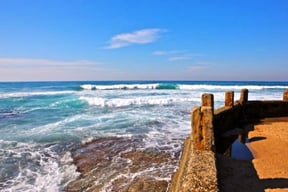 Mtwalume Beach is situated on the Umdoni Coast of KwaZulu-Natal. It is surrounded by an abundance of indigenous fauna and flora, and the Mtwalume River which forms a beautiful lagoon stretching into the sea. The water is warm and there are quaint tidal pools ideal for swimming. You can also enjoy angling, scuba diving and surfing.

Things to do in South Coast

Sleeps 5 in 2 rooms
Palm Beach Self-catering, Bed and Breakfast
Samango Retreat is located in the little village of Palm Beach and is within a short drive of the beach. It is well-suited for all ages,...
R1500
Avg per night
View Deal

Sleeps 6 in 3 rooms
Hibberdene Self-catering
Miami Oakes is a lovely self-catering house situated in Hibberdene, only a short walk to the beach. This is the ideal location for a...
R2400
Avg per night
View Deal

Sleeps 6 in 3 rooms
Margate Beach Self-catering
Colonial Sands is situated in the vibrant seaside town of Margate, along the South Coast.The apartment has three bedrooms and two...
R1590
Avg per night
View Deal

Sleeps 46 in 10 rooms
Umtentweni Self-catering
Welcome to Fern Gully Self Catering Accommodation.This massive property is situated on a 6527...
R1240
Avg per night for 2 guests
View Deal
See all accommodation near South Coast

Click to display the map
Mtwalume Beach is 31,6km from the centre of South Coast , the nearest airport 52,2km (Margate Airport).
*Distances are shown as the crow flies and not necessarily the actual travelling

Other things to do near South Coast

★★★★★ 1 Review
Fun Park in Margate
Funworld is situated in a beautifully restored old cinema and casino complex in the centre of...

Golf Course in Port Shepstone
Just an hour drive away from Durban, golfers can enjoy a great game at Port Shepstone Country...
See all things to do near South Coast
WEB4