Welcome to SafariNow. Get off your accommodation booking by paying with the voucher code before .
South Africa/Gauteng/Johannesburg/Nasrec/Soccer City 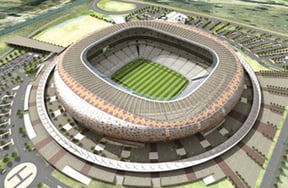 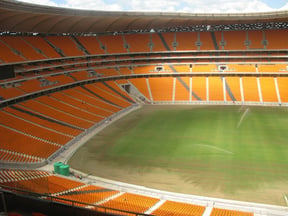 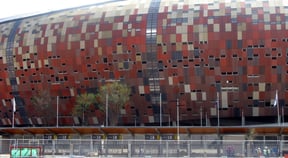 Host to the 1996 African Cup of Nations, Soccer City is South Africa’s prime football venue and it will be the most important venue for the 2010 FIFA World Cup – the kick-off site for the opening and the final match. The original seating capacity for 80 000 people was enlarged to accommodate 94 700 people.

Along with this, the precinct now has a fully functional transport hub including a railway station. The rail system will serve future industrial, commercial and residential developments planned for the area after the football tournament. Besides the rail station, the transport hub has taxi, bus and rail drop off and pick up points. The total public transport capacity of the hub is projected to be 23 280 an hour.

Why we love it? Soccer City is the main match venue for South Africa’s football squad, Bafana Bafana, as well as the simmering contests between local Soweto club rivals, Kaizer Chiefs and Orlando Pirates.

Click to display the map
Soccer City is 11.2km from the centre of Johannesburg , the nearest airport 29.6km (Johannesburg International Airport).
*Distances are shown as the crow flies and not necessarily the actual travelling

Other things to do near Nasrec

Spa & Wellness in Gauteng
Jonice Spa is situated on the banks of the Vaal River. It is less than an hour from Johannesburg,...

Golf Course in Centurion
Copperleaf is an excellent course, carefully designed for a challenging and enjoyable round of...
See all things to do near Nasrec
WEB5