Welcome to SafariNow. Get off your accommodation booking by paying with the voucher code before .
South Africa/Northern Cape/Loxton Accommodation 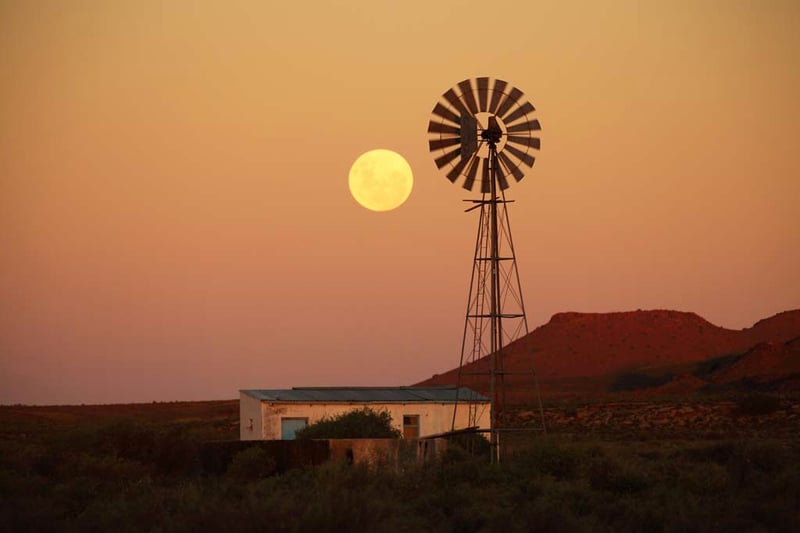 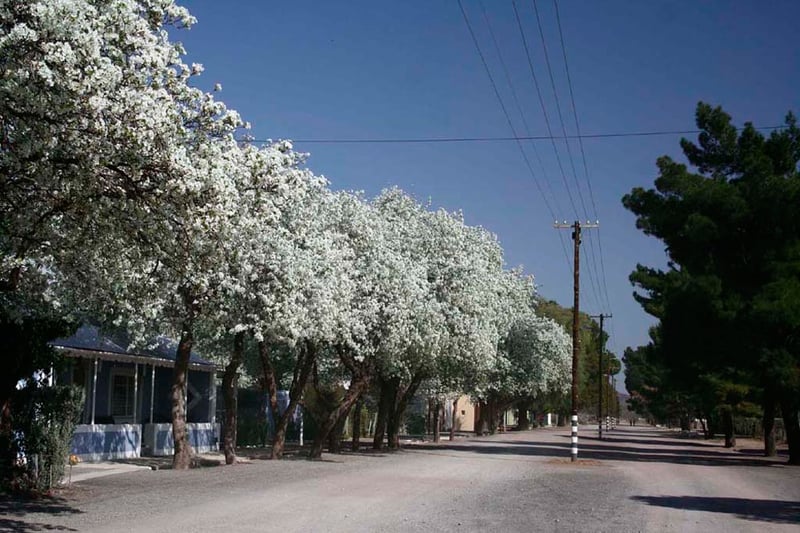 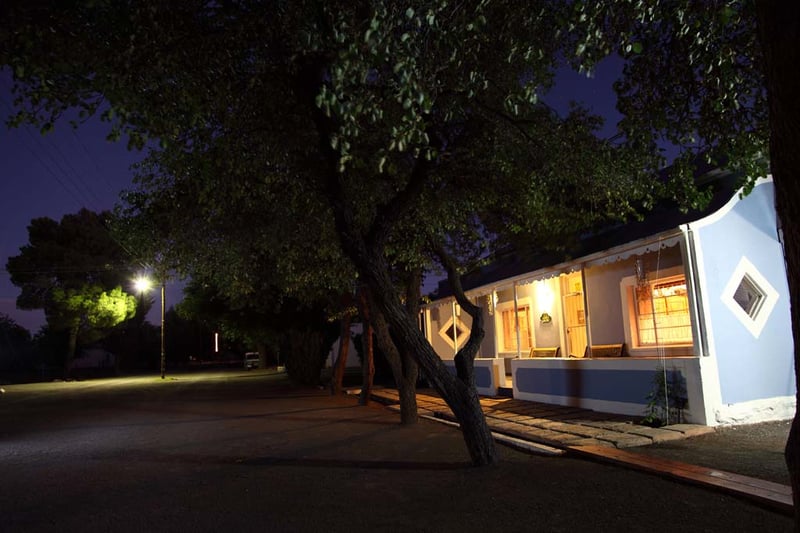 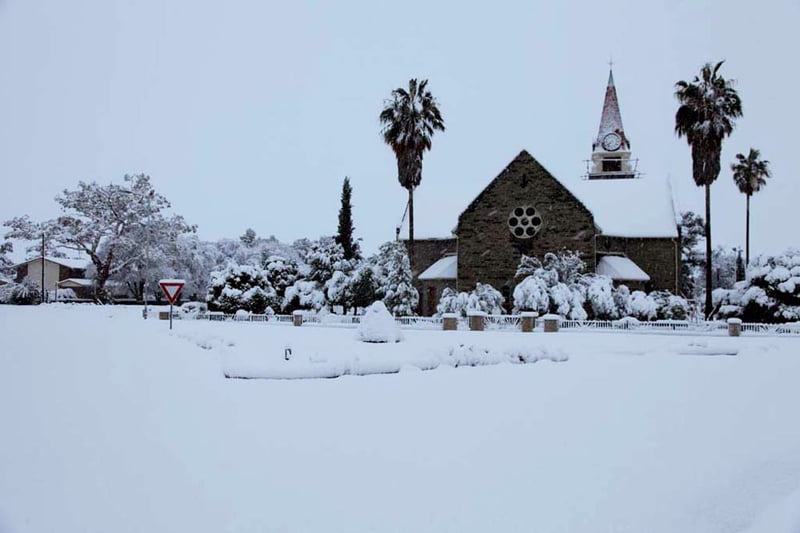 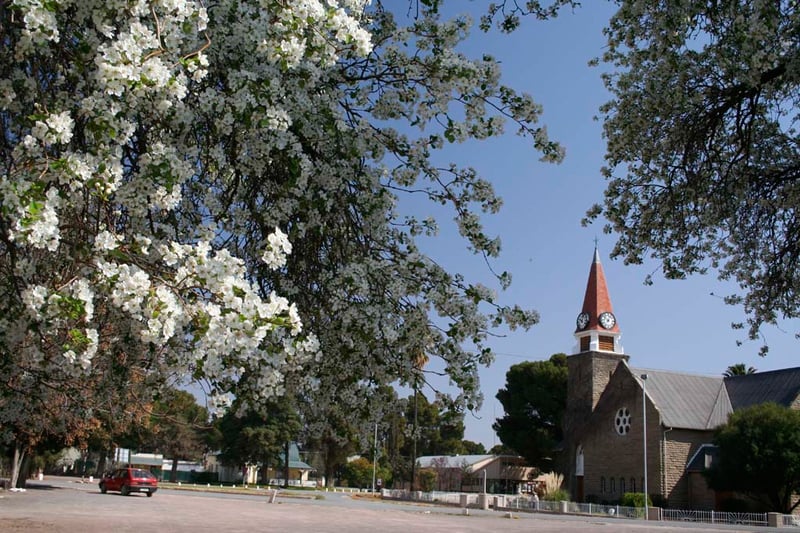 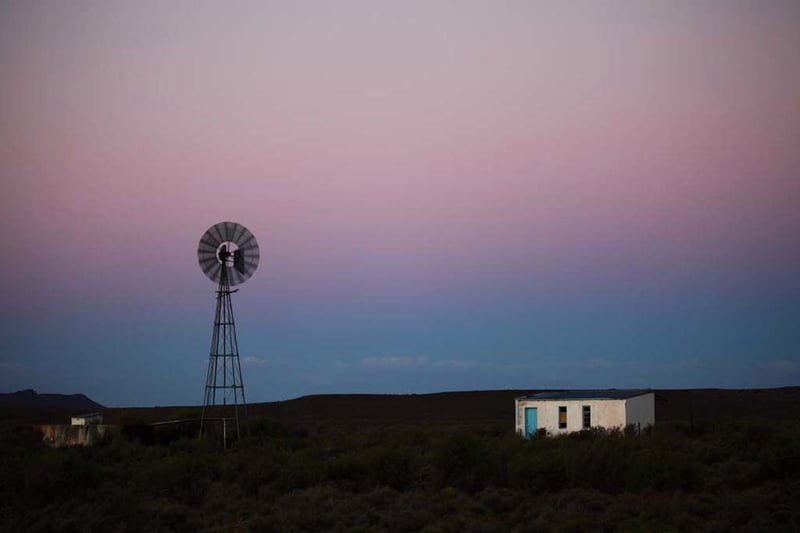 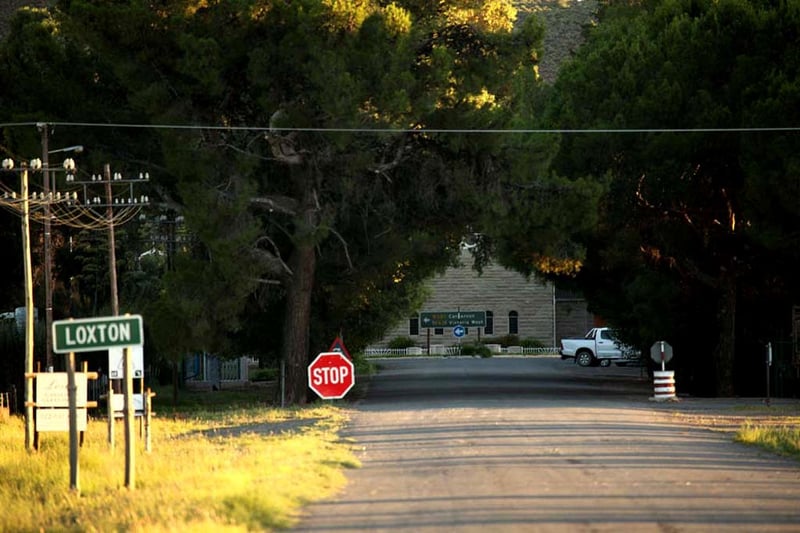 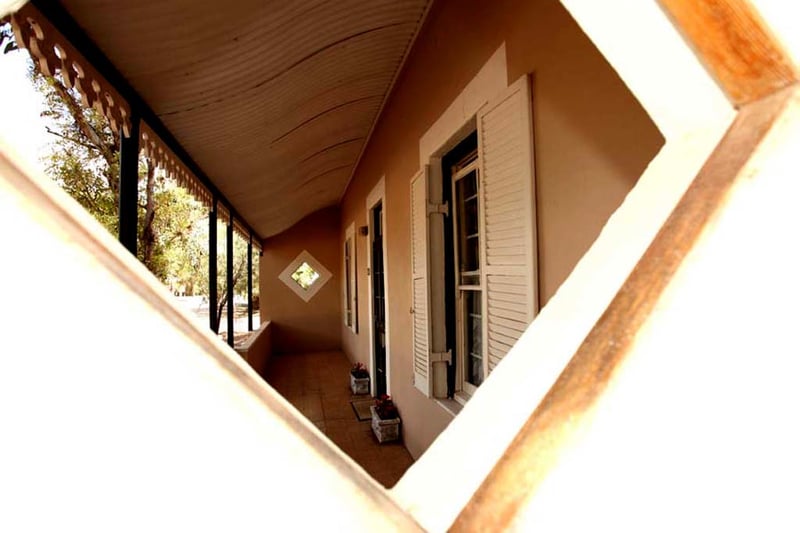 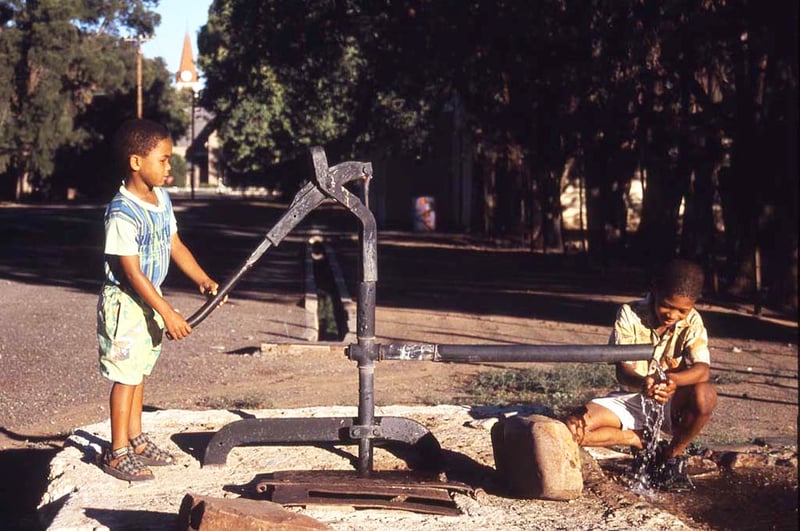 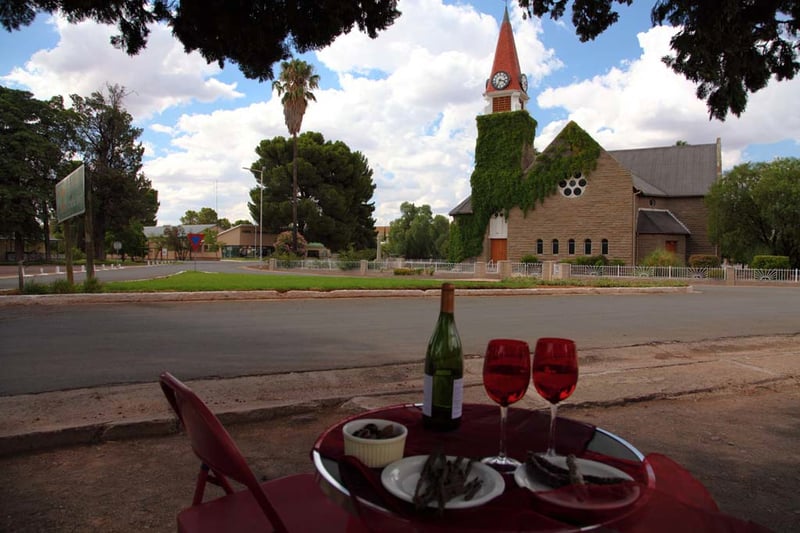 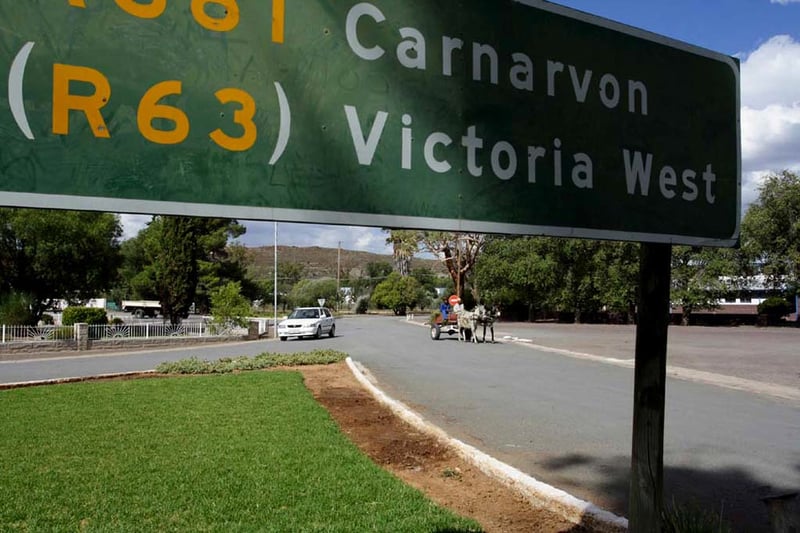 The Land of the Stoep

Bright stars rather than bright lights
Deep in the heart of the Great Karoo lies Loxton, a peaceful village known for its tree-lined streets and vernacular architecture. It’s one of those hamlets that draw people who appreciate a tranquil, crime-free lifestyle - bright stars rather than bright lights. Although Loxton can be reached via the tarred R63 that runs through the Northern Cape to Namaqualand and the West coast, it’s isolated in terms of accessibility to the larger centres. The nearest big town is Beaufort West on the N1, reached by travelling 120km south from Loxton along a gravel road that traverses two mountain passes.

Saints, sinners and sheep farmers
Loxton’s history dates back to 1899 when the authorities decided that the community of Victoria West, that today lies 80km to the east, had grown too large. Size in those days was measured in terms of hours ridden on horseback, and at eighteen-hours-long and thirteen-hours-wide with a population of 1,250 people, it was decided that a new town was needed to serve the sheep-farming community around it. When the farm Phezantefontein was purchased from Algernon Edgar Loxton for £7,500 for this purpose, he made a condition of sale that the new town be named after him, and so Loxton was established on 12 July 1899 with a population of 150 souls. Within a year, the first Dutch Reformed Church and school were completed, and the far-seeing committee also determined to plant cypresses, pepper trees and beefwood trees on either side of all roads. Many of these trees remain today. At the same time, the parsonage and hotel were completed, and then a small mission church was erected. By the 1920’s a larger church was needed, the cornerstone for which was laid in 1925, and it’s this church, made of local sandstone and covered in a Virginia creeper that serves the community today.

Holiday haven for city weary souls
By 1948 Loxton’s population numbered 741, but over the years there was a steady decline in population, as with many small Karoo towns. City life beckoned and at one point it was thought that Loxton would become a retirement village for just a few weary souls. Today the village is enjoying a revival and although the permanent residents number only 65 people in the original town, many others own holiday houses. Facilities and services are few, but this also seems to be a draw card for residents and visitors alike, and you won’t find a busy, polluted town centre here. There are a handful of retail outlets, amongst them a farmer’s co-op, bottlestore, general dealer, coffee shop and a few guesthouses. Interestingly enough, Loxton has no main street and most of its roads, which are gravel, have electricity poles running down the centre of them. Contrary to popular belief, these were not so-placed to keep resident’s driving skills honed, but rather, there was no space to put them along road verges, which were already lined with trees.

Footloose to the hoëstoep-huisie and old jail house
The best way to explore the village is on foot. At a mere six streets long by eight streets wide it’s an easy walk to take in some of the finer examples of architecture, like the old jail, a tiny stone building dating to 1900, and the hoëstoep-huisie, a good example of the Karoo-building style. An annotated survey of buildings of architectural, historical and contextual importance in Loxton was conducted in the late 1980’s by the National Monuments Council, revealing that the town still retains some fine nineteenth-, and early twentieth-century architecture. Formerly dilapidated houses have been restored to show off their Victorian style. Wooden fretwork and various styles of corrugated iron roofs can be seen including ogee, bullnose, and concave. Diamond windows on end walls, pedimented parapets, classical pillars, and balustrades with balusters are fairly common and many buildings have retained their wooden shutters and sash windows.

Waterborne Loxtonners
It’s fortunate that many old buildings remain, as one of the biggest events in the town’s history was the great flood in March 1961. A newspaper reported that in the preceding five days, 125mm had fallen, then another 125mm in one night. Whilst the town prepared to evacuate and the dominee moved the elderly to higher ground, not all residents were willing to believe that disaster was imminent. Snuifsnor, as Oom Hendrik Smit was nicknamed, refused to leave his house stating that the dam would not burst – after all, he had helped to build it. However, it did burst, sending waves up to five foot high into town, destroying eleven houses and damaging three-quarters of the rest. Fortunately, Snuifsnor and his wife had been forced to safer terrain as it was later discovered that their bedroom wall had collapsed onto their bed. Today, Loxtonners have a Karoo Water Sports Centre where members gather on weekends to ski on a large farm dam and some say that it was during this ’61 flood that they started acquiring their watersports’ skills.

Leiwater runs through it
It’s years since the dam was full and the only water that flows regularly through town now is that which runs from a nearby fountain down the original leiwater channels that are used to flood-irrigate resident's gardens. Enthusiasts are rewarded with bounty from their residential plots, in spite of the harsh climate, and if you’re offered apricot or fig jam, it’s bound to be locally grown and homemade. Also still in operation is the old hand pump that was once situated on the old transport route where it was used to water the horses and people alike. It dates back to when the dam was built around 1912 and the fountain’s water was relayed from the dam wall to the town via wooden pipes, a portion of today’s pipeline still consists of the latter.

The wild, Wild West of Loxton
Sadly, one building that no longer remains is the lovely hotel that was the focal point for residents and travellers alike. It’s reputation reached many corners of the country, perhaps because of the more colourful characters who frequented it. One story is about local farmers who, in the 1970s, held horse races that they took so seriously it warranted some buying in racing stock, which would then be sent to them by rail. During one race meeting, a jockey was caught cheating, which so enraged a local farmer that he rode into the hotel bar on his horse, and started firing his gun. It was later reported that the hotel owner, who was behind the counter, was seen frantically scribbling to keep tab as bottles were shot off the shelves. One of the bullets ripped through the ceiling, but fortunately there were no occupants in the room above. This story ended up in Texas and is thought to have contributed to the then-status of ‘The Wild West of Loxton’.

Encounters with humming UFO's
Although the area never built a name for racehorses, it was once renowned for the quantity of vegetables produced, but garlic is the only fresh produce grown en masse today. However, this has always been sheep farming country and it was back in 1975 when smallholder Danie van Graan was going to check on his sheep that he saw what was reported as a UFO. When the author of ‘UFO Africa Encounters’ interviewed Oom Danie, he explained that at first he saw what he thought to be the aluminium roof of a caravan parked a couple of hundred metres beyond the earth wall he’d climbed. Assuming it was government prospectors looking for uranium, he decided to join them for coffee. Nearing the van, he noticed it was oval-shaped and the four thin, pale occupants inside were moving in slow motion. Going on to describe further physical attributes of the beings and their ’caravan’, he claimed the vessel was humming and upon closer inspection he was hit in the face by a brilliant beam of light coming from it. Oom Danie’s neighbour heard the humming noise but the UFO departed before he saw it, although there were other witness reports of the sighting.

Karoo corbelled houses and a fairytale castle
The vast plains and hills around Loxton are ideal for hiking and biking and although you probably won’t spot a UFO, you can visit a fairytale castle. There’s a privately owned replica Dutch Castle built in the seventies by Jan Hugo. Oom Jan had always wanted to live in a castle and on a trip to Holland he made sketches on a cigarette box that were used to start the construction. Each time he needed further details, he’d fly to Holland and make more drawings and the result was a three-storey castle with turrets, inverted cones and crenellated parapets. A replica Dutch windmill was built nearby. Whilst exploring the outlying area, its worthwhile noting that farm dams offer rewarding bird watching after times of good rain, especially if you head out on a canoe. There are also farms offering opportunities to view fossils, and Loxton is one of the few towns around which the unique dome-shaped stone corbelled houses are found.

Inspired in the 'land of the stoep'
Although there are days when only a donkey cart klip-klops down the road, this lack of activity belies the life going on behind closed doors. Loxton is home to several authors, including veteran novelist Nita Griessel who’s had over 70 books published; it has a photolibrary specialising in Karoo and other images; is the home of the African Arabian Wildlife Centre; and the Riverine Rabbit Working Group. If you visit, be aware that there are definite seasons in this part of the Karoo that include sub-zero winters and occasional snowfalls. Come spring, Loxton’s pear trees explode into white blossom and the scent of summer hangs in the air. This is the time to lie beneath a wind pump and watch snowy jet-trails bisecting the deep blue sky. Summers are hot; autumn offers the chance of refreshing rains; but whatever the time of year, make a point of sitting on a verandah and you’ll discover several reasons why Lawrence Green called this ‘the land of the stoep’. It’s the perfect place to contemplate life.

Planning a trip to the Northern Cape or the Eastern / Western Cape Karoo? A useful and inspirational book to have on the road is the Getaway Guide to the Karoo, Namaqualand & Kalahari - Out and About in the Northern Cape by Brent Naudé-Moseley & Steve Moseley, who are also the proprietors of Karoo Cottage in Loxton.