Welcome to SafariNow. Get off your accommodation booking by paying with the voucher code before .
South Africa/Western Cape/Kleinbaai/Kleinbaai Whale Watching 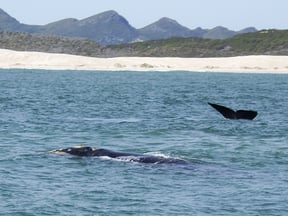 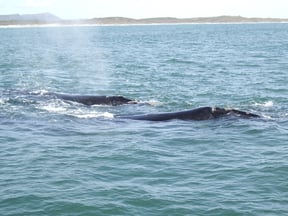 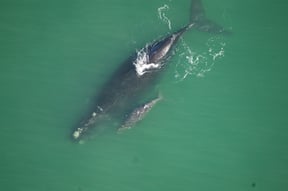 Take a boat trip and get a close up view of the Southern Right Whales. The Kleinbaai area is generally regarded as one of the best whale-watching sites, attracting many of these mellow giants of the sea.

The Southern Right Whales start arriving in June to mate and calve. Peak time for whale watching is October, but many whales can still be seen in November, tailing off in December.

Most of the whales in the Walker Bay area are Southern Right Whales, but other species do make an occasional appearance. Humpback whales migrate through the region between May and December, while Bryde’s whales are found slightly further off shore all year round.

Occasional sightings of Killer Whales, or Orcas, have been reported. Dolphins that can be seen in the region include the endemic Heavisides dolphin, Bottlenose and Common dolphins.

Things to do in Kleinbaai

★★★★★ 5 Reviews
Sleeps 14 in 6 rooms
Kleinbaai Guest House
A warm welcome and an experience in service and style await you at White Shark Guest House. Featuring views of the Atlantic Ocean, White...
R1500
Avg per night for 2 guests
View Deal

Sleeps 8 in 4 rooms
Kleinbaai Self-catering
Connect with Nature. Experience Bliss and Inspiration, lose yourself in a breathtaking environment. Awake to sounds of happy birds and...
R10000
Avg per night
View Deal

★★★★★ 3 Reviews
Sleeps 12 in 6 rooms
Kleinbaai Backpacker, Self-catering
White Shark Backpackers is a large house situated on the beachfront in in Kleinbaai. The house has six bedrooms and offers comfortable...
R500
Avg per night for 2 guests
View Deal

Click to display the map
Kleinbaai Whale Watching is 0.6km from the centre of Kleinbaai , the nearest airport 110.7km (Cape Town International Airport).
*Distances are shown as the crow flies and not necessarily the actual travelling
WEB4