Welcome to SafariNow. Get off your accommodation booking by paying with the voucher code before .
South Africa/Western Cape/Cape Town/Kalk Bay/Kalk Bay Books 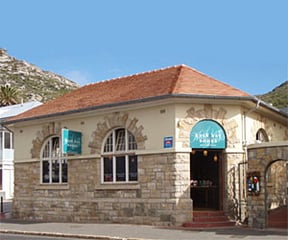 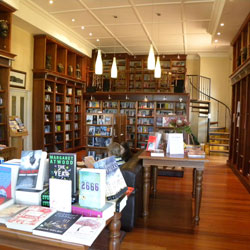 Described as the book shop with the best view in the world, Kalk Bay Books is a gathering place for locals and visitors alike, who browse and buy books, share a glass of wine or two with visiting authors, and gather for new book launches or discussions. The leather sofa invites customers to spend some time considering the books on offer, and to catch up on international book news with the New York Review of Books and other reading matter provided for their interest.

Today, instead of tall tales being told around the bar counter, tales are sold at a shop counter, which was specially designed with a nod to the history of the building. Kalk Bay Books occupies premises that have a varied and interesting history. As recorded by author and historian Michael Walker in Kalk Bay: An Historical Booklet and Walk (Kalk Bay Historical Society), the building that now houses the bookshop was originally known as Die Klipkantienjie and was designed by architect John Parker in 1913.

'The saloon and public bar formed part of an overall extension to the Old Masonic Hotel. Beside die Klipkantientjie, this single-storey extension had seven bedrooms, a storeroom and a large billiard roon, and was in fact larger than the Masonic Hotel. After the Masonic Hotel was demolished in 1916 the extensions became knows as The Annex to the Kalk Bay Hotel, which was later renamed the Majestic Hotel. The external façade of The Annex has changed little since Parker’s design of 1913.’

If getting to the book shop is a problem, you can browse their online books selection, which includes hand-selected fiction and non-fiction books, and many book lists offering their suggestions on a wide range of themes in the Open Books section of the website.

Sleeps 2 in 1 room
Kalk Bay Self-catering, Package Deals
Enjoy this 2 night package for two at One Quay at the Majestic which is a luxurious one-bedroom...
R1775
Per person for 2 nights
View Deal

Strathmore Flat in the Annex ...

Sleeps 4 in 2 rooms
Kalk Bay Guest House, Self-catering
Strathmore Flat is located on the middle floor of a charming house next to Chartfield.The...
R2600
Avg per night
View Deal

★★★★★ 1 Review
Sleeps 8 in 4 rooms
Kalk Bay Self-catering
Kimberley House is a gracious old house filled with light and situated halfway up a cobbled cul-de-sac, a few metres from the sea in Kalk...
R5000
Avg per night
View Deal

Sleeps 16 in 4 rooms
Kalk Bay Package Deals
Enjoy this 2 night package for two at one of the Majestic luxurious two-bedroom apartments with a big living room, a fully equipped...
R4250
Avg per night
View Deal
See all accommodation near Kalk Bay

Click to display the map
Kalk Bay Books is 22.5km from the centre of Cape Town , the nearest airport 24.2km (Cape Town International Airport).
*Distances are shown as the crow flies and not necessarily the actual travelling
WEB5