Welcome to SafariNow. Get off your accommodation booking by paying with the voucher code before .
South Africa/Western Cape/Hermanus/Bientang's Cave 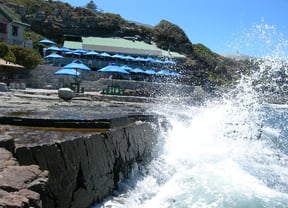 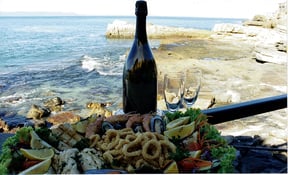 
One of the most exciting and unusual restaurant in the world, Bientang’s Cave is a more than just a dining experience.

Located in one of the most stunning Marine Reserves on the coast of the Western Cape and a mere 10 metres from the water’s edge, this unique restaurant is in a prime spot for watching whales play in the ocean as you dine on the finest seafood.

Between May and December every year, Southern Right whales visit the shores of the Western Cape and Bientang’s Cave is perfectly placed to be able to see these magnificent creatures as you sit on the deck and sample from the fantastic menu and the extensive, award-winning wine list.

2 reviews Reviews of
★★★★★
1 out of 5 stars
5 star 0
4 star 0
3 star 0
2 star 0
1 star 2
Andy Vlok
★★★★★
23 March 2013
We booked our table a week in advance because we heard it was such a good and busy restaurant. My wife and I were celebrating our 5 year anniversary and we were told that Bientang's Cave is the place to be for a romantic night out, I guess we were wrong.While on our way to the restaurant, which we would have been 15minutes early, I got a phone call from one of the employees to let us know that our booking has been cancelled due to the restaurant not having any customers...at all.So, they would rather close their doors and make no money, than have 3 or 4 tables. To me that makes no sense.Just...
see more
R Hartley
★★★★★
09 January 2012
These guys have lost the plot! I cannot write a review of the food because we never got as far as ordering any after waiting for about 45 minutes. Trying to speak to a manager is like requesting an appointment with a god and the owner, oh, he just doesn't give a damn. In fact, when you do complain he'll tell you that you are having a bad day. I will never go there again. It has a beautiful view though and I think that's the only thing counting in their favour.

★★★★★ 9 Reviews
Sleeps 8 in 4 rooms
Voelklip Self-catering
Very comfortable family home located two minutes' walk from one of the most beautiful beaches in Hermanus, where guests can watch the...
R2500
Avg per night
View Deal

★★★★★ 18 Reviews
Sleeps 19 in 8 rooms
Hermanus Guest House
On The Cliff is situated on the beautiful Hermanus cliff paths, where you can experience the best land based whale watching in the world....
R2336
Avg per night for 2 guests
View Deal
See all accommodation near Hermanus

Click to display the map
Bientang's Cave is 0.2km from the centre of Hermanus , the nearest airport 87.3km (Cape Town International Airport).
*Distances are shown as the crow flies and not necessarily the actual travelling

Other restaurants near Hermanus

Salt of the Earth

Coffee on the Rocks

★★★★★ 1 Review
De Kelders Coffee Shop restaurant in De Kelders
Coffee on the Rocks perches on the edge of the ocean overlooking Walker Bay, home to the visiting...

★★★★★ 1 Review
Stanford Deli restaurant in Stanford
Completely built of stacked limestone blocks in 1892, the Spookhuis is a local landmark and legend...
See all restaurants near Hermanus
WEB05