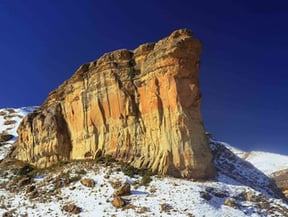 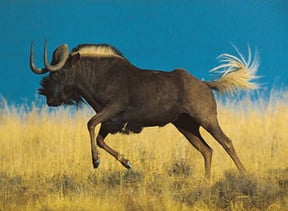 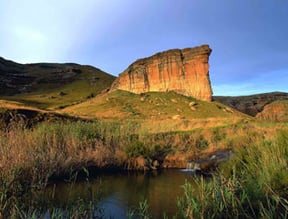 Famous for its golden sandstone cliffs and abundant antelope and zebra herds, Golden Gate Highlands National Park nestles in the rolling foothills of the Maluti Mountains.

The park is named for the glowing golden cliffs lit by the sun, particularly the imposing Brandwag rock. Wildlife you are most likely to see include black wildebeest, eland, blesbok, oribi, springbok and Burchell's zebra. If you're lucky you could spot the rare bearded vulture (lammergeyer) and the equally rare bald ibis, which breed on the ledges in the sandstone cliffs. Try to visit the Vulture Restaurant.

Ribbokkop, the highest point in the park, reveals a breath-taking tapestry of red, yellow and purple hues as its warm shades merge with the cool mountain shadows towards evening. Other stunning lookouts are the Zuluhoek lookout point, Generaalskop viewpoint (third highest point in the park); Oribi Basin and Drakensberg view. Hikers can chose from various day trails (varying from 1 hour to 5 hours) or the awesome two-day Rhebok Hiking Trail (2 days and 1 night).

Up for an African cultural experience? Get to experience the Basotho way of living dating back to the 16th Century by tasting traditional cuisine and learn about the traditional equipment and weapons at the Basotho Cultural Village. The Herbal Trail introduces visitors to the medicines that were (and still are) used by the African Traditional Healers.

Other things to do near Golden Gate Highlands National Park

★★★★★ 1 Review
Theatre, Gallery or Museum in Clarens
The Addy & Hoyle Art Gallery is on the square in the middle of the little artists' village of...

★★★★★ 15 Reviews
Popular Attraction in Clarens
Enjoy a craft brew as you relax and take on the sights and sounds of Clarens. Clarens Brewery brews...
See all things to do near Golden Gate Highlands National Park
WEB2